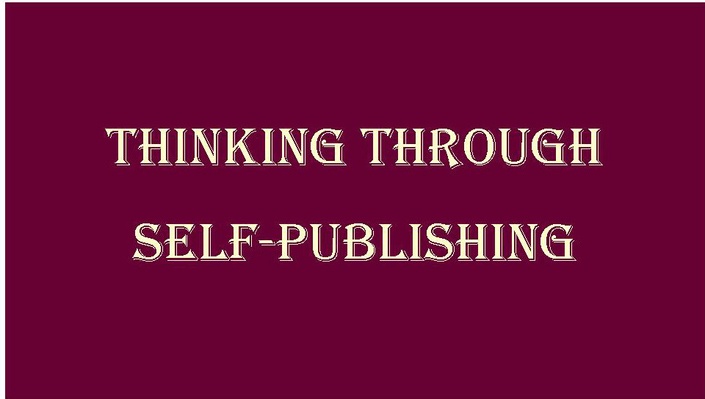 Thinking Through Self-Publishing: Is It for You?

You're writing a book, essay, or how-to guide, and you want to publish it your way. Or maybe you aren't sure you can find a publisher. Not because your work isn't good, but because there are so few traditional publishers and competition is intense.

A book can be fantastic, but if it doesn't fit into a publisher's precise plans for this year, your proposal won't make it to a decision-maker. In fact, most publishers require you to have an agent, and they are just as hard to acquire as a publisher.

Do you toss your book in the trash? No! Self-publishing is work, but it is not complex. Will you get rich? Probably not, but you can make a decent income and build on that.

Dozens of online books or ads on social media promise riches through publishing. Though slightly more possible than the lottery, wealth is unlikely. Satisfaction and decent income can be. You need a way to determine if you can find your readers without spending months learning how. And you need to find out if you can make money or if you will be publishing for fun.

"Thinking through Self-Publishing" guides you through decision-making, led by a teacher who has published nearly twenty books herself. The course is deliberately inexpensive and fairly brief. Your time is valuable -- you have books to write. Elaine L. Orr authors three mystery series, including the eleven-book Jolie Gentil cozy mystery series. Behind the Walls was a finalist for the 2014 Chanticleer Mystery and Mayhem Awards. The River's Edge mystery series features From Newsprint to Footprints and Demise of a Devious Neighbor (a Chanticleer finalist in 2017). Her newest series is the Logland Series, set in small-town Illinois. It began with Tip a Hat to Murder, and in late 2018 will be followed by Final Cycle.

Elaine also writes plays and novellas, including the one-act play, Common Ground, published in 2015. Her novella, Biding Time, was one of five finalists in the National Press Club's first fiction contest, in 1993. Falling Into Place is a heartwarming piece that explores family relationships when PTSD is in the mix. In the Shadow of Light puts faces on the policy of separating parents and children at the U.S./Mexico border -- from several perspectives, with a focus on those who help others.

She spent dozens of hours learning how to format and market her books. While much was interesting, ultimately little of what she learned was essential. She decided to reduce the learning curve for other authors by creating courses on the Teachable Platform. Thinking Through Self-Publishing helps attendees decide if they want to self-publish (and is free). Writing and Publishing when Time is Scarce is an affordable option to help move a prospective writer to a published author.

Elaine began helping authors by preparing how-to articles on her blog, giving talks at libraries and writing retreats, and teaching online courses for a professional group. Instructive nonfiction includes Words to Write By: Getting Your Thoughts on Paper and Writing in Retirement: Putting New Year’s Resolutions to Work. She wrote the latter after often being asked how she had written ten books in five years.

Elaine graduated from the University of Dayton with a BA in Political Science and from the American University with an MA in Government. She did some journalism course work at the University of Maryland, and after a career in government and nonprofit sectors, she began to write even more seriously.

Thinking Through Self-Publishing
Available in days
days after you enroll

When does the course start and finish?
The course starts now and never ends! It is a completely self-paced online course - you decide when you start and when you finish.
How long do I have access to the course?
How does lifetime access sound? After enrolling, you have unlimited access to this course for as long as you like - across any and all devices you own.
What if I am unhappy with the course?
We would never want you to be unhappy! If you are unsatisfied with your purchase, contact us in the first 30 days and we will give you a full refund.
off original price!

You have things to write. I hope this course has helped you see self-publishing as an option for your books, essays, or articles. If you are ready to learn more, by all means look at other courses at http://lifelong-dreams.teachable.com/. My reasonably priced courses can help you with many aspects of writing and publishing. Still have a question? Drop me a note at [email protected] I wish you continuing success!