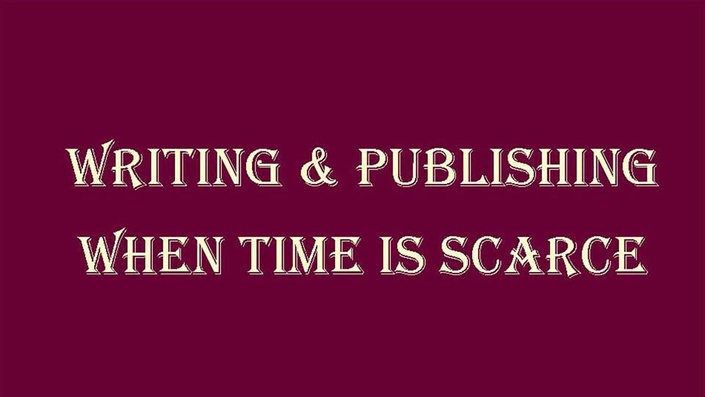 Writing and Publishing When Time is Scarce

Life is busy. Learn how to add writing to the mix -- for a manageable price.

You're busy. Even though a day is full of work, home responsibilities, and time with people you love, you want more. You have ideas for a book or you want to start a blog on a topic you are passionate about. How do you add one more thing to a calendar already filled to the brim?

If writing that book is so important, you can make it work. I'll help you.

Topics are to the point and the resource lists in each one let you learn more if you so choose. There are no video lessons. Why? Because you can skim a few pages in a short time, and your time is limited.

This class begins with goal-setting and time management, but you could learn that a lot of places. "Writing and Publishing When Time is Scarce" is valuable because it helps you put your life in the context of your writing.

And then it walks you through the writing, editing and publishing processes--whether you work with a publisher or do it yourself. Though we will go over types of writing and finding markets to match your work, this is not a "writing" class with practice lessons.

We will give you solid information to help you edit that piece of fiction or nonfiction. The difference between a rough draft and best-selling book is recognizing what can be better.

After we've helped you with your content, we'll move to reaching readers -- selling your book. We'll go over how secure to enough readers to bring in income. Will you get wealthy? Probably not. But if you work hard (and smart) enough, you can bring in a meaningful amount -- maybe enough for a down payment on a house, or a new car.

But, we're getting ahead of ourselves. The first focus is a quality product.

Take a look at the course outline. I think I can help you get where you want to be. And have a little fun along the way. Elaine L. Orr authors four mystery series, including the twelve-book Jolie Gentil cozy mystery series. Behind the Walls was a finalist for the 2014 Chanticleer Mystery and Mayhem Awards. The River's Edge mystery series features Demise of a Devious Neighbor (a Chanticleer finalist in 2017). Her newest series is the Family History Mystery series, set in the Western Maryland mountains. The Unscheduled Murder Trip is a B.R.A.G. Medallion recipient. The Logland Series, set in small-town Illinois, features quirky characters and a small town police chief.

Elaine also writes plays and novellas, including the one-act play, Common Ground, published in 2015. Her novella, Biding Time, was one of five finalists in the National Press Club's first fiction contest, in 1993. Falling Into Place is a heartwarming piece that explores family relationships when PTSD is in the mix.

She spent dozens of hours learning how to format and market her books. While much was interesting, ultimately little of what she learned was essential. She decided to reduce the learning curve for other authors by creating courses on the Teachable Platform. Thinking Through Self-Publishing helps attendees decide if they want to self-publish (and is free). Writing and Publishing when Time is Scarce is an affordable option to help move a prospective writer to a published author.

Elaine began helping authors by preparing how-to articles on her blog, giving talks at libraries and writing retreats, and teaching online courses for a professional group. Instructive nonfiction includes Words to Write By: Getting Your Thoughts on Paper and Writing in Retirement: Putting New Year’s Resolutions to Work. She wrote the latter after often being asked how she had written ten books in five years.

Elaine graduated from the University of Dayton with a BA in Political Science and from the American University with an MA in Government. She did some journalism course work at the University of Maryland, and after a career in government and nonprofit sectors, she began to write even more seriously.

When does the course start and finish?
The course starts now and never ends! It is a completely self-paced online course - you decide when you start and when you finish.
How long do I have access to the course?
How does lifetime access sound? After enrolling, you have unlimited access to this course for as long as you like - across any and all devices you own.
What if I am unhappy with the course?
We would never want you to be unhappy! If you are unsatisfied with your purchase, contact us in the first 30 days and we will give you a full refund.
off original price!

Life is busy, and it may be tempting to think writing that story or book can be put off until a big chunk of time waltzes into your life. It won't come until you make time to tango. Look ahead with enthusiasm, not back with regret.